The men’s and women’s semi-finalists are decided in Manchester …. Quarter-finals report, plus summary of the earlier pool matches. 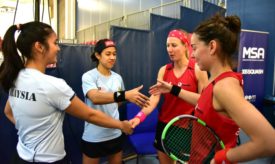 The first quarter-final was decided quickly, with Malaysia’s Rachel Arnold injured and unable to play, so she and Nicol David conceded, putting Jenny Duncalf & Alison Waters into the semi-finals.

“It’s never the way you want to win,” said Duncalf, “but we’re delighted to be in the semis.” 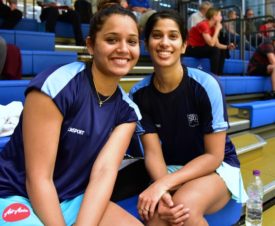 They’ll play second seeds Dipika Pallikal & Joshna Chinappa after the Indians survived a close three-game tussle with Canadians Cornett & Todd, dropping the first game and pulling away at the business end of the third.

“They played well and surprised us,” admitted Pallikal, “we’re just glad to get through that one and be in the semis.” 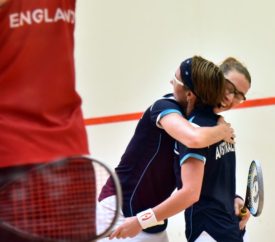 They’ll meet familiar foes in Australia’s Rachael Grinham & Donna Urquhart, who got the better of three close games against England’s Massaro & Perry, just falling sort of a comeback as they lost the first 10/11, then coming from 2-6 down to take the decider 11/9.

“It was all Rachael today,” said Urquhart, “it was her type of crosscourt game and she plaed really well to get us back into it in the third.”

“We played good doubles in the first game, moving them around and controlling things,” said Clyne. “The second was a bit messy, but we worked well together to get through, it’s good to get another two-nil win under our belts.” 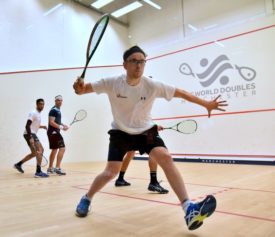 In the bottom half of the draw second seeded Aussies Cameron Pilley & Ryan Cuskelly made quick work of unseeded Dutchmen Bennett & Schweertman, while English duo Declan James & James Willstrop got the better of Aussies Palmer & Alexander in an entertaining 77-minute encounter, the longest of the tournament so far.

“It was a bit of an unknown quantity playing the Dutch dark horses,” said Pilley, “we needed to stay sharp and try to control things, and that’s what we did.”

“My partner played brilliantly tonight,” said Willstrop. “He had to put up with a lot of striking down the backhand side and you don’t get the rewards straight away in doubles and you have to have the mental strength to keep going and know that the momentum can swing in your favour in the match.

“I had complete confidence in Dec tonight, it was coming on to his forehand a lot and he handled it.” 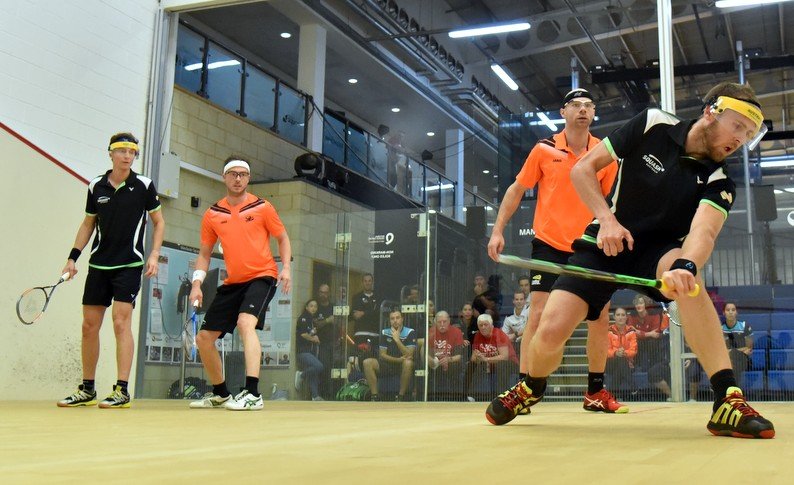 Day Three of the WSF World Doubles in Manchester started with the final pool matches in the Men’s and Mixed events, with the quarter-finalists to be decided. 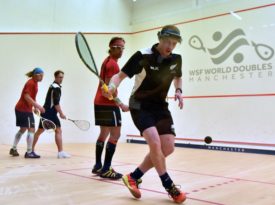 Pools A and B had already been decided and this morning three men’s matches saw Kiwi pair Coll & Grayson clinch top spot in Pool D – letting four match balls slip in the second before despatching their Canadian opponents in the third – with two English pairings, Selby & Richards and Willstrop & James winning their matches in straight games to take second spots in Pools C and D. 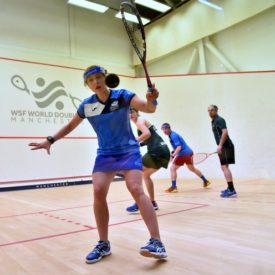 In the Mixed matches the top seven seeds won through to the quarters, joined by Scotland’s Kempsell & Aitken, the 9th seeds who completed their impressive run with one last win to top Pool A. That left top seeds and defending champions Coll & King in second spot and facing a quarter-final against second seeded Indians Ghosal & Pallikal who cleaned up in Pool B..

The upsets continued as Indian scratch pairing Malhotra & Chinappa beat third seeds Pilley and Urquhart to top their pool, and English duo Selby & Waters continued their winning run with victory over experienced Australians Palmer & Grinham to complete an unusual looking set of quarter-finals – the bottom match being between the #1 and #2 seeds in a repeat of last year’s final in Darwin!