Day Two of the 2017 WSF World Doubles started with two of the top seeds and reigning World Champions on court. 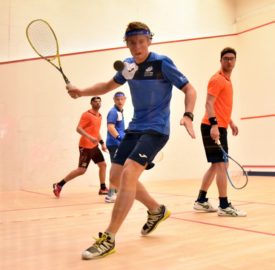 In Men’s Pool A top seeds Clyne & Lobban wasted no time in wrapping up the group, dismissing unseeded Dutchmen Bennett & Schweertman in just 16 minutes. Both already had two wins under their belts, and both progress to the quarter-finals. 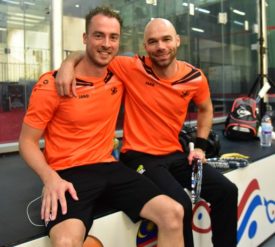 “It had to happen sometime,” said Dylan Bennett, “but they’re very good. You can tell they play a lot together, they play the angles very well without giving you anything to work with – they’re the world champions, after all.

“We didn’t expect to be in this position, but we’re delighted to get through and we’ll give it our all in the quarters.”

Later in the day, Australian second seeds Pilley & Cuskelly wrapped up Pool B with a third win, and third seeds Palmer & Alexander also made it three out of three in Pool C.

The men’s quarters will be finalised after the final matches on Thu morning.

Meanwhile in the early Mixed match, top seeds Coll & King found themselves in a real battle as Scottish pair Kempsell & Aitken took the first game and held a slender advantage throughout the decider. 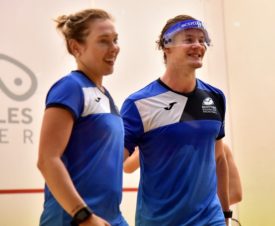 At 10-8 there were several lets as the women concentrated on playing crosscourt to each other, but immediately after saving the first match ball Joelle King served out to hand the match and a big upset to the Scots.

“We just wanted to be solid and not give anything away at the end,” said a delighted Dougie Kempsell. “Lisa said she’d be happy to play 500 shot rallies, but while serving out isn’t the way you’d like to win a match like that, we’ll take it!”

There’s still plenty to play for in the Mixed, with matches in all pools tomorrow morning. 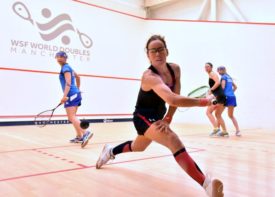 Top seeds in the women’s, New Zealand’s King & Landers-Murphy and India’s Chinappa & Pallikal had booked their quarter-final places yesterday with two wins apiece, but all the remaining places depended on deciding matches today. 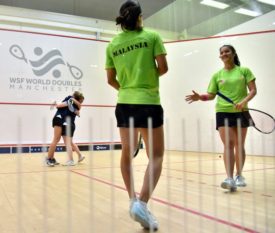 Canadian pair Cornett & Todd won their Pool A decider in quick time, and Welsh pairing Evans & Saffery came from a game down to grab second spot in Pool B.

Pool C went to the wire, ending in a three-way tie as Aussies Cardwell & Nunn edged out Malaysia’s Arnold & David in a third game tiebreak, but missed out on a quarter-final place on games countback. Australia’s Grinham & Urquhart ended up pool winners with the Malaysians in second.