The Squash New Zealand World Doubles Team to compete in Darwin from 15th-18th August has been announced.

All four players have a wealth of doubles knowledge and experience and are expected to perform well at the 2016 World Doubles Championships.

Paul Coll has recently reached a career high World Ranking of 31 and will be looking to add some medals to his trophy cabinet. Coll paired with fellow compatriot Lance Beddoes at the 2014 Commonwealth Games where they achieved a top 8 finish after beating pairing Martin Knight and Campbell Grayson in the top 16.

Campbell Grayson will pair with Paul Coll in the Men’s Doubles and they are expected to be a tough force with Grayson currently holding a World Ranking of 42. Grayson will bring the most experience to the team having competed in the 2006, 2010 and 2014 Commonwealth Games along with the 2006 World Doubles Championships where he claimed a bronze medal. 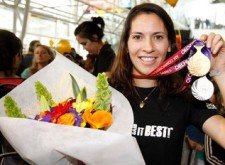 Joelle King will be looking to add another medal to her tally after a gold medal in the Women’s Doubles and silver medal in the Mixed Doubles at the 2010 Delhi Commonwealth Games. King partnered with Jaclyn Hawkes and Martin Knight respectively in those events. King has returned to the top 10 in the PSA rankings and this will help secure a solid seeding for the women’s pairing at the event.

Amanda Landers-Murphy will pair with King in the Women’s Doubles and they will be looking for a top result at the event. The pair reached the quarter-finals in the 2014 Commonwealth Games in Glasgow and will be looking to improve on this performance in 2016.

Final Mixed Pairings will be confirmed after a training camp due to be held next week. Glen Wilson will be coaching/managing the team in Darwin and with Glen’s depth of doubles knowledge he will be looking to get the most out of the players.

Squash New Zealand wishes the team well at the event.