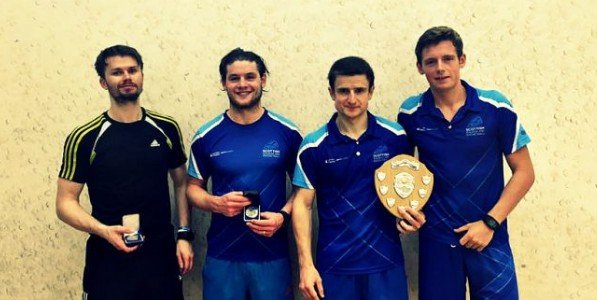 The Scottish Doubles Selection event took place at Scotstoun Leisure Centre to determine the pairings that will be selected to represent Scotland at the World Doubles Championships in Darwin, Australia.

Six teams entered which were split into two pools of three teams.

Matches kicked off at 1000 with Alan Clyne/Greg Lobban dominating pool one and showing why they were no 1 seeds with straightforward wins over Chris Leiper/Jamie Henderson and Martin Ross/Michael Ross.

Pool 2 was also off to a flyer. Rory Stewart/Stuart George almost caused an upset when they took the first game against Dougie Kempsell/Kevin Moran. A cracker of a match – full of shot making and fantastic recovery work. Kempsell/Moran worked hard to earn a 7-11, 11-4, 11-5 win.

And so it was on to the semi-finals. Stewart/George showed no real threat for Clyne/Lobban who progressed through to the final with a straight forward 11/3 11/5 win.

They were joined by Kempsell/Moran who beat Leiper/Henderson 11/6 11/7. Although there were plenty of long rallies in this match Kempsell/Moran always looked in control and deserved their place in the final.

And so the play-offs continued. Next on court was 5th/6th play-off which was possibly the match of the day. The Central Junior pairing of James Dougan & Jack Orr were up against the Edinburgh University brothers Martin Ross/Michael Ross.

The first game looked fairly comfortable for the Ross brothers taking it 11/5. However all credit must be given to the Central teenagers who were not going down without a fight and came back to take the second game 11/10. The third game could have gone either way with Ross’s just taking it 11/9.

Next on court was 3rd/4th Play-off between Chris Leiper/Jamie Henderson and Rory Stewart/Stuart George. This really was a cracker of a match with Stewart/George giving it everything they had. Leiper/Henderson played extremely well in the first to take it 11/6. Some outstanding winners by Stewart/George and a couple of unforced errors by Leiper/Jamieson ensured Stewart/George took the second game to level the match at 1-1. The third game was again closely fought but Leiper/ Henderson came out strongly and took the third 11/6 giving them a 2/1 victory and clinching third place.

Last but by no means least we were down to the Men’s Final. Both pairs had been practicing hard over the last couple of weeks which really showed in their tactics for this match. Plenty of drives down the middle and crafty front court shots. This match was full of long rallies and plenty of decisions . Kempsell/Moran put up a fine fight and had spells of being in control, occasionally forcing the odd unforced error from Clyne/Lobban however they could never stay on top for long enough to close a game and Clyne/Lobban ran away with 11/6 11/7 victory.

Congratulations to ALAN CLYNE/GREG LOBBAN and DOUGIE KEMPSELL/KEVIN MORAN who have been selected to represent Scotland at the World Doubles Squash Championships in Darwin from 15th – 19th August.

“Very happy to win this first tournament with my new partner Greg. I am happy with the way that we played and we worked well as a team. This all bodes well for Australia and we can’t wait to get going. There will be some good teams in this event but I am really delighted to be playing.” – Alan Clyne

“It was good winning the title. We only had a few weeks preparation so we are both pleased with how it came together and we have paired up really well. Playing in any World Championships is exciting, we should be seeded quite high and will be a tough team to beat.” – Greg Lobban

“We had a really good event and knew what we had to do. To say that we are excited about Australia is a huge understatement – we are ecstatic!! Really looking forward to the event.” – Dougie Kempsell